​Last week, we spoke briefly about the film Super Duper Alice Cooper. Then, sometime before today’s post, we wanted everyone to try and watch the documentary; if there is anyone that hasn’t, make sure to try and do so at your leisure.

The following link shares a few ways to stream the documentary in various countries: https://www.justwatch.com/us/movie/super-duper-alice-cooper

“In each of us, two natures are at war – good and evil. All our lives the fight goes on between them…” – Robert Louis Stevenson

Super Duper Alice Cooper opens with the above-listed quote from author Robert Louis Stevenson. From there, the film uses Stevenson’s Strange Case of Dr. Jekyll and Mr. Hyde as an inspirational source to tell the story of Alice Cooper. The parallel fits perfectly.

“In my heart, I always knew what was right. I never had a doubt about who God was or who the Devil was.” – Alice Cooper

Alice stated in the documentary that he always had a “moral compass.” He knew right from wrong. However, even with that knowledge and understanding, the Alice Cooper character came alive and consumed his actual persona – Vincent Furnier.

Alice and the cast in the documentary go on to explain how the character overwhelmed the man. It wasn’t an overnight altercation. After a few fast-paced years, the transformation started slowly but eventually left Alice broken, sick, and on death’s doorstep.

Some key events helped pave the way to notoriety (and rehabilitation):

Through various scenarios, introductions, and milestones, Alice Cooper found a way to communicate and interact with a subculture ready to bypass the Hippy movement and take on the darker aspects of reality. That movement was led by teenagers and young adults who identified with Rock, Punk, and Heavy Metal music.

This phenomenon overtook the world of music and scared parents to death. However, Alice Cooper forced humanity to face the darkness in many ways, usually by shining a light on taboo subjects like child abuse, domestic abuse, religious hypocrisy, mental illness, etc.

If you watched the movie or already know his story, you can identify with Alice’s journey. Where it took him and how it affected him. While his story is incredible, it’s also very familiar.

The parallels between Alice’s story and the story of humanity are not uncommon. And, as he admits above, it’s a tale of good and evil. The story of our Creator wanting nothing more than to have us say, “I’m yours. Shape me, mold me, use me as you see applicable, Lord!”

Alice makes no bones about it; he required an intervention. While many pivotal events and people (including his wife, Sheryl Cooper, and his manager, Shep Gordon) helped catapult him back to health. It was ultimately the intervention of the Holy Spirit that saved all aspects of his life.

Alice found himself at that all too familiar crossroads – the one every person must face where they choose either life or death. Life being eternal and blessed by our Lord, Jesus Christ (through the acceptance of Him) or death being forever cut off from Him – lost in darkness.

The very same conditions and circumstances apply to every human on this Earth. We are all living out the words of Robert Louis Stevenson – we bear a Jekyll and a Hyde, and God’s gift of free will allows us to choose between the two. But, alas, with that gift comes two sides of the coin (Galatians 5:13-15).

Left to our own devices, we are driven by our flesh and the desires of this world – “Sex, Death, and Money.” Thus, we, inherently, are mesmerized by Hyde (James 1:14-15).

Therefore, an intervention is needed. Someone that can stand in our place and point us in the right direction – leading and guiding us forward (Proverbs 16:9). That mediation is ever-present and available to anyone that asks (Matthew 7:7-11).

Our Creator has presented us with His Son, Jesus Christ, as the vessel by which we are offered salvation, rehabilitation, and restoration. Accepting Him, we become new creations (Galatians 2:20), and His Spirit dwells within us (John 16:4-15).

“I appeal to you, therefore, brothers, by the mercies of God, to present your bodies as a living sacrifice, holy and acceptable to God, which is your spiritual worship.  Do not be conformed to this world, but be transformed by the renewal of your mind, that by testing you may discern what is the will of God, what is good and acceptable and perfect.” – Romans 12:1-2

With the transformation of our hearts, the war has been won. However, we are left with the battlefield of our minds. As we begin our spiritual journeys, we are asked to look at life from a new perspective – His perspective.

We are asked to replace our desires with His desire – to love one another as He loves us (John 13:34-35) and surrender daily, putting our sinful nature to death (Colossians 3:5).

It’s interesting how God uses each one of us individually. As we pointed out last week, each of us is “fearfully and wonderfully made” (Psalms 139:13-16). We were placed here for a purpose.

We must decide whether we will carry out that purpose (asking the Holy Spirit to intervene and guide us) or if we are going to live and die according to our own devices. The choice has been laid in our hands.

In conclusion, Super Duper Alice Cooper does a masterful job laying out the most significant stages and highlights of Alice’s early life and career. During this 90-minute documentary, we learn how the character betrayed the man but ultimately reintroduced him to his faith.

“God saved me, so I’m here now. Let’s see what happens. I think that’s when God can go, “Okay, now are you ready? Ready to start this?” – Alice Cooper

The most intriguing part of Alice’s story shows us how God 1) refuses to forsake us (Isaiah 55:1-9) and 2) often uses the darker moments of our lives to shine His Light the brightest (John 1:5).

There’s no doubt that “Fridays With Alice” tends to pull more discernment, wisdom, and intrigue from the latter part of Alice’s career (the Trash LP onward). However, perhaps some of the brightest, most profound moments were during those “Blackout” years and albums.

Where many may have seen or forecasted a tragic ending, God provided a brilliant beginning. In that regard, Super Duper Alice Cooper is merely the opening act.

From the end of the documentary to today, Coop’s storyline miraculously became a testimony of the power and magnificence God’s Grace, Love, and Mercy provide.

It’s as simple as that; Alice’s willingness to share his journey (the ups, the downs, and everything in-between) is something special. As Coop continues to rock and shock us all, may we take a page from his book and learn to seek Our Creator as we endeavor this adventure called life. May we choose Him and His Word, NOT evil.

That’s it for this week. Be well, and we’ll catch you next Friday.

END_OF_DOCUMENT_TOKEN_TO_BE_REPLACED 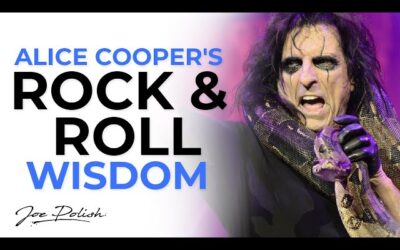 This week we take a look at another Alice & Sheryl Cooper interview. In late 2018, they were featured in a Q&A session with Joe Polish’s Genius Network. The discussion is close to an hour in length and well worth the watch. Many of the topics Alice and Sheryl discuss are known about them. However, Polish does a great job allowing them to expound and give more details…