Time is getting closer
I read it on a poster

Love It To Death, Alice Cooper’s third studio album was released in 1971. At this point, the band had made a name for themselves but had still not developed their sound. Enter Bob Ezrin.

“When Bob Ezrin got hold of us, he said, “Look, everybody wants to love you guys, but there’s nothing to hang the handle on. You guys have no musical handle.” So he took us for eight months. We sat in Detroit in a barn, ten hours a day, and we learned to play.” – Alice Cooper

Ezrin not only assisted the band in developing their craft but also contributed musically as well. He helped orchestrate their style. Horrific sounds, eerie tunes, and shock-based rock coupled with classical piano were his unique idea that added depth to the album.

From that time spent in Detroit, the snarls, growls, and riffs of Alice Cooper were born. Alice admits, “Love It To Death was a really hard record to make.” The album included classics such as “I’m Eighteen,” “Ballad of Dwight Fry,” “Sun Arise,” and “Caught In A Dream.”

The supporting tour for the album also introduced a nurse dragging Alice off stage. Only for him to return, bound in a straightjacket, and then ultimately meeting his fate executed by the electric chair.

This week’s song, “Second Coming,” is the 7th track on the album.  The song is a rarity in that Alice solely wrote it. Most of the band’s songs were collaborative efforts, but this one and a few others were exclusively written by Alice or other members of the group.

It seems the track carries a couple of points laced within the music and lyrics.

There seems to be evidence of a time when faith was more recognizable. As if Alice is lamenting back to a time when he was back in Phoenix – growing up in the church. Only a few short years had passed, but the drugs and alcohol may have already begun taking their toll on him and his psyche.

The “bells getting louder” may have been a reminder or an example of that inner voice of God calling for us to walk with Him. However, there’s more to these words. By the end of the song, the listener is reminded of Christ’s Return – the “Second Coming.”

Like most of Alice Cooper’s work, this song carries a cautionary message – “have no gods before me, I’m the LIGHT!” With that, we will be looking at this song a little deeper from two perspectives: 1) the inner voice of God and 2) the Second Coming of Christ.

The Inner Voice of God
Recognizing and knowing God’s still, small voice can be trying, but it doesn’t have to be. Once anyone has accepted the Truth of His Word, His Spirit begins speaking to one’s conscience – delivering bits of information (i.e., right from wrong, deliverance from evil, etc).

The Lord said, “Go out and stand on the mountain in the presence of the Lord, for the Lord is about to pass by.”

I will stand at my watch
and station myself on the ramparts;
I will look to see what he will say to me,
and what answer I am to give to this complaint.

Then the Lord replied:

“Write down the revelation
and make it plain on tablets
so that a herald may run with it. – Habakkuk 2:1-2

Both Elijah and Habakkuk knew the sound of God speaking to them, yet they learned it’s best to seek Him in silence – away from distractions (also referenced in Psalms 62:5).

We spend a reasonable amount of time distracted by the things of this world – calls, texts, emails, entertainment, social media, etc. If we only focus on those things, it’s easy to miss God, calling us to something more – a more meaningful life. It takes persistence, diligence, and commitment.

We must become deliberate with our faith. Learning from the examples outlined in God’s Word, we see that solitude is essential. Spending time alone with God in prayer and meditating on His Word bring answers and clarity – solutions only found in Him, not in the world.

The song also mentions walking on water – a direct reference to Peter stepping out of the boat to meet Christ upon the water (Matthew 14:22-33). Like Peter’s scenario, the song alludes to someone that has taken their eyes off of Christ, no longer focused or walking with Him. They are instead distracted and sinking.

By the end of the song, we find a declaration from Christ. Calmly He (Christ) declares that He is the only way to the Father – He is The Light (John 14:6). It’s also a call for anyone that has placed ‘other gods before Him’ to come back to the fold (Luke 15:3-7).

Stop and think for a moment. Isn’t this song essentially about a person crying out to God? As if they are saying, “God, I want to be with you and walk with you again,” and asking, “how do I get back?”

God doesn’t ignore them. Instead, He answers first with a calm, mellow answer but ends up shouting, “I’m the Light.”

While God often answers in whispers or lesser-known ways, He does, from time to time, use a much louder or drastic measure to get our attention. Are there times you can remember when God answered you quietly? Loudly?

The Second Coming of Christ
The song also issues a warning at the end. It’s subtle, but it’s there. The line ‘have no gods before me’ is a cautionary appeal to our hearts. Our lives are short, and His return grows closer each day (Revelation 22:12). Therefore, we must stay focused and ready for His return.

It is our responsibility to help others understand and prepare for His return (Matt. 28:18-20). When that still, small voice pleas for you to uplift, enlighten and encourage another person, know it’s a thought from Him and submit to His Will.

Wrapping this up, the world is on fire. The year 2020 has left humanity with more questions than answers. A good friend of mine joked, “it’s as if we wake up each morning wondering what chapter of Revelation is going to unfold today.” Most likely, this isn’t the end of humanity, but what if the end is near?

Have you adequately addressed life’s purpose and meaning? Have you found it?

This post discusses the voice of God and embracing His calling for our lives. But to the flip-side of that, the enemy is always looking to divert our attention. Be mindful of your thoughts and actions. Do they line up with scripture, or do they line up with the world’s narrative?

His Word is our guidebook – a tool we use to interpret our path and how we should navigate through the muck and mire. When thoughts and ideas don’t line up with Him and His Word, they are most likely attacks from below.

For instance, insight from God should enlighten, encourage, and promote well-being – He is our Teacher, Counselor, Creator, Deliverer, Healer, and the list goes on (paraphrasing James 3:17).

On the other side, thoughts and ideas from the enemy imply doom, misery, anxiety, doubt, and selfishness – he is the enemy, deceiver, destroyer, and thief (paraphrasing James 3:14-15).

We must train our hearts, minds, and ears to know the difference.

In conclusion, “Second Coming” leads the listener to a place of humbleness. Alice shares a piece of his heart with the audience. While he would later claim that his faith was not wholly intact early on in his career, Alice, indeed, knew the truth.

As we wait for the “Second Coming” of Christ, may we learn to keep our eyes fixed on Him – “The Light.” For if we faithfully step out with Him and keep our gaze focused on Him, we will indeed “walk upon the water.”

That’s it for this week, catch you next Friday.

END_OF_DOCUMENT_TOKEN_TO_BE_REPLACED 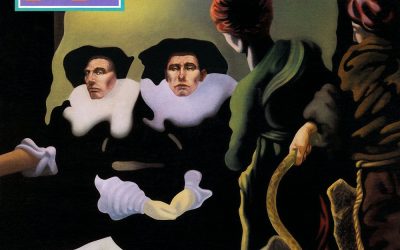 Alice Cooper’s 8th solo album, DaDa, was released in 1983. The last of four albums referred to as the “blackout” albums, DaDa winds up being Alice’s final album for Warner Bros. Records. Interestingly enough, while the album wasn’t well-received, it did prove to be one of Cooper’s more notable records. This week’s song is “Former Lee Warmer”…