“Lace and Whiskey” was released in 1977. The LP finds Alice playing the role of a new character, “Maurice Escargot.” Escargot is a heavy-drinking detective from the 1940s. This persona has its flaws but seems much less sinister in nature. The live show during this era was entitled “The King of The Silver Screen” and lasted nearly two years with a three-month intermission in the middle for time spent rehabilitating from his bouts with alcoholism. 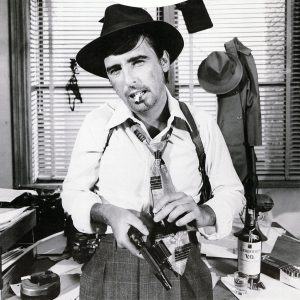 The show, complete with dancing chickens, Tommy guns, tv commercials, and of course, the guillotine, was filled with a combination of intrinsic humor yet with a little less of the macabre themed underpinnings. Songs on the album displayed a mixture of hard rock, disco, love songs, and a Gospel-based ending with “My God.” The album’s playlist with songs like “You and Me,” “Road Rats,” “I Never Wrote Those Songs,” and “(No More) Love At Your Convenience” demonstrate the teamwork and creativity of Alice Cooper, Dick Wagner, and Bob Ezrin. They were not afraid to think outside of the box – delivering a fresh new perspective with this album.

By the end of the tour, Alice had been put through the wringer, so to speak. The drinking and nonstop touring had simply left him in need of an intervention. His wife, Sheryl, and manager, Shep Gordon, convincingly pressed Alice to check into Cornell Medical Center in White Plains, New York. He would resurface, after 3 months, sober and inspired with new material for his next album. His stay and the characters found in White Plains, New York, would soon become the infamous album, “From The Inside.”

‘My God’ is the final track on the album, which seems fitting.  Like one of David’s Psalms, it finds Alice crying out to God.  The terms ‘still, small voice’ and ‘sheep – drifted lost’ are used, which directly points to 1 Kings 19:11-13 and Luke 15:3-7.  Alice has often referred to himself as the modern day, Prodigal Son.  Both he and his wife, Sheryl, are PKs (preacher’s kids). They both grew up in the church and knew God’s word. While previous albums and songs had religious connotations attached to them, “My God” was the first to reveal an all-out display of praise and admiration for the Creator of all things, great and small. It is a magnificent song and most likely inspired and helped pioneer other forms of Christian rock during that time.

In 1 Kings 19:11-13, we find Elijah waiting upon the presence of the Lord.  After winds, an earthquake, and wildfire pass by, he notices that God has still not said a word.  Finally, the Lord uses a gentle whisper to speak to Elijah.  Often times, we are looking for God and expecting Him to say and do something so profound and monumental that we never take the time to be still and listen.  How many of us only depend on God to speak to us at church, during conferences, at revivals, or through the words of a pastor?

Alice, even in the midst of Rock and Roll and alcohol, knew the voice of God.  He knew to humbly and quietly listen to God’s guidance.  He knew it was time to come back to his Heavenly Father. It was time to seek the Truth he had been taught and shown as a young man.

The last lines of the song are “When sheep, like me, have drifted lost, all frightened children who are tempest tossed, down flies His wrath like an albatross…My God!” This brings us straight to Luke 15:3-7.  In these verses, Jesus asks why a shepherd would leave his flock of 99 to save the life of one?  He goes on to say that the Heavens rejoice more over one sinner that repents than over the ninety-nine righteous people who are already saved and repentant.

Alice has often mentioned that God allowed him to experience many things then basically reeled him back into the fold. It sure seems as if the song, “My God,” was a direct expression of that process or at least, the beginning of that process. It appears as if it was time for Alice to start finding answers to those more profound questions in life while accepting the forgiveness of His Lord.

Looking at the timeline in his life, this song fits perfectly within the scope of events and frustrations he must have been dealing with. The breakup of the original band, the initial success of the album “Welcome To My Nightmare,” and it’s supporting tour. Then the gradual decline in sales with the next two albums “Alice Cooper Goes To Hell” and “Lace and Whiskey.”

God’s Love for us is EXTREME!

He sent His Only Son, our Lord Jesus Christ, to earth. With that selfless act, we are not judged but forgiven (John 3:16). Acceptance of Him and His death (Romans 10:9-10), proclaiming Him as Lord (2 Corinthians 4:5), and entering into a relationship with Him (Hebrews 11:6), drives out the darkness and pain found in this world. It’s a process – a journey!

He’s not going to beat us over the head with a hammer (or a Bible).  But He’s always standing there – wanting, willing, waiting, ready to catch you.   Be still and let Him bring you back to the fold. Be still and know that HE IS (YOUR) GOD!

Wrapping this up, the new year seems to always be an excellent place to reflect on where you are and where you’re going. Ask yourself some of those tough questions. Are you outside of the fold looking in?  Are you in the fold?  Are you taking the time to be still and listen?  Are you in tune with that still, small voice? The Love of our Lord is magnificent.  He left Heaven – was shamed, beaten, spat upon, falsely judged, etc. all to show us His Love. The Love of the Father made manifest in man. His Love is the same then as it is now…but it must be accepted. He wants us to ask for Him, to want Him, to yearn for Him…Are you ready to receive it? Have you accepted it? Listen. His “still, small voice, it calls and calls. Then like a thunder bolt, it falls and falls…My God!” Amen.

In conclusion, I’ve actually been a bit surprised at the reaction this album gets from critics and the fan base. Overall, it’s not overwhelmingly accepted. Honestly, it’s either loved or hated to some extent. It seems at this point in Alice’s career, he was more focused on staying true to his own forms of expression. Being free from the original band most likely was a blessing and a curse. Alice Cooper, for those first few years, was comprised of five personas with five different perspectives of what they thought the band should be, yet now that brand, that music, and that concept was embodied by one man alone. During those years after the initial group had split, it seems a “Nightmare”-induced trip to “Hell” combined with a little “Lace and Whiskey” was enough to send the Shepherd after His lost sheep. Praise God that Alice was drawn back into the fold and answered that call!