This week, we are changing things up a bit. With every song and nugget of faith etched within the words of an Alice Cooper album, there is also the man, himself, who doesn’t need music or lyrics to share his faith.

Alice isn’t shy about proclaiming the Gospel and has often been quoted about life, redemption, and Christ. As a result, he’s become an inspiration to Christian Metalheads and perhaps a vessel to Christ for some unexpected folks as well.

“I have talked to some big stars about this, some really horrific characters, and you’d be surprised. The ones that you would think are the furthest gone are the ones that are more apt to listen.” – Alice Cooper

Stop and give that one some thought. Think about all the different people Alice has had access to and the various discussions he has had. Time on tour, a morning on the golf course, conventions, meet and greets, you name it; in those places, if and when asked, Alice has the opportunity to share.

Now stop and think about your own life. Who do you come into contact with on a daily, regular basis, or by chance? Do they know you serve a mighty God and how much you love Him (not to mention how much He Loves you and them)? Have you ever been asked about your faith? Are you willing to share? 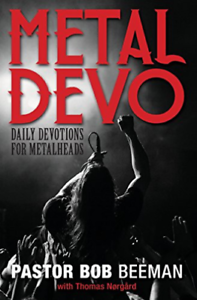 The above-listed Alice quote and the initial thought process for this post come from Pastor Bob Beeman’s “Metal Devo: Daily Devotions for Metalheads.” It’s a fascinating book and a motivational read.

Artists and individuals quoted in the book’s devotionals include:

That list only scratches the surface of individuals quoted in Beeman’s devotional, but it gives you an idea of the minds used to create such an exciting book of daily inspiration.

Stop and think about how “sacrilegious” this list must seem to some folks that don’t quite understand the diversity and magnificence of Christ’s Love. To see theologians and philosophers listed with the likes of Heavy Metal musicians, many might never understand, but our Creator does.

Once we’ve removed the religious connotation and manufactured categories of who and what is relevant in this world, we notice something grand – a designed network of God’s creation.

In the above-listed verses, Paul covers many characteristics we should be willing to demonstrate as we share our faith. The following include, but are not limited to:

We’ve been given a chance to share Christ’s Love. With freedom, that opportunity is not bound to the laws of man. It becomes the will of God carried out spontaneously and uniquely through each one of us willing to listen to His call.

In conclusion, Alice and Pastor Bob both get it. No one is too far gone. No one is more or less worthy of God’s Love. Not everyone speaks the same language when it comes to their faith in Christ. However, each soul matters; equally.

“Be open to everyone around you today. Be ready to give an answer to anyone who may ask you about the hope you have in Jesus” – Pastor Bob Beeman, Metal Devo (Day 217)

We have all been placed on a journey. Each one is different yet no more or less important. May we be mindful of that as we seek Him and interact with everyone around us.

Sometimes, the most significant inspiration comes in nuggets and chunks. We often find those intertwined within an Alice Cooper song. However, it’s also inspirational (perhaps for some, maybe more) to hear the man himself expressing his testimony and faith. Different strokes for different folks, we suppose.

Whatever way Alice inspires you and your faith, make sure you search for the Lord daily and don’t be afraid of admitting you don’t know it all. Be willing to search daily for Christ and ask for His Spirit to guide and motivate your steps forward.

Pastor Bob’s devotional may be an excellent place to help you with daily direction and ways to dive deeper into God’s Word. So, if interested, check it out. But, with that being said, let us remember that many of those that we think are “too far gone” may be the “ones more apt to listen.”

That’s it for this week. Be well, and we will see you next Friday.

In the meantime, Keep Walkin’ in Faith and Rockin’ with Alice.