I was shattered, left in pieces And I felt so cold inside
Then I called you from the darkness where I hide

In the beginning you were revelation
A river of salvation and now I believe
All I wanted, all I needed was someone to rescue me
I was drowning, I was dying, now I’m free

Here I am now, I can stand now coz your love has made me strong
And forever you’re the singer, I’m the song

‘Welcome 2 My Nightmare‘ was released in 2011, some 30+ years after the original ‘Nightmare’ album was released. Once again, this ‘Nightmare’ is a concept album, like the first. Once again, Steven’s nightmares take us on a journey. This time ones that depict Hell and some tongue-in-cheek examples of the horrible things that can be found there. An interesting approach finds Kesha playing the part of Satan.

“I Am Made of You” is a masterpiece. It’s the first song on the album and opens with the same eerie piano riff from the song ‘Steven’ (found on the original ‘Welcome to My Nightmare’ album) but then it quickly turns into a symphonic rock ballad. One that finds the singer working through three parts of his despair – exasperation, expectation, and ending with exaltation. It may very well be the greatest song in his vast catalog of music. This post will look at this song from a few different scenarios. While the song can be interpreted many different ways, we will focus mostly on David and the Psalms during this post. However, as you listen to the song, it definitely applies elsewhere in scripture. The stories of Adam, Abraham, Moses, etc. apply. This song at some point defines everyone’s walk with Him. Those tough pills life sends us to swallow. The ones that push our faith the hardest. The places where real growth take place.

In Psalms 13, David’s words very closely relate to the first few lines of ‘I Am Made of You’. He’s found pleading with God using the words ‘how long’ four times within the first two verses. It’s obvious he is trapped in some sort of darkness and despair – even physically spending time in the cave of Adullam (1 Samuel 21:15-22:2). However, he remains vigilant, faithful, and holds on to his trust in the Lord. It seems easiest to give up and lose hope in those dark times, yet doing so only leaves you consumed by despair and ruin. Perseverance and faithful intention allow God to move. But His timing is not the same as ours. Hold on and wait for His breakthrough to happen. Looking back on His plan is often easier than looking forward. Seeing where He’s brought you is usually much easier than learning or discovering where He wants to take you (or how and when He answers that next prayer or supplies you with the next steps).

The next few stanzas after the chorus lead to “…revelation, a river of salvation and now…” belief. Even while standing in faith, it’s often difficult to see the way out. The picture is fuzzy yet the evidence of His workings are right there in plain sight. Our faith is intact, but logic and reasoning demand the evidence be blatantly obvious. As humans, we often allow our surroundings, current events, and other intangible factors dictate our moods and mindsets. Instead, we should strive to work diligently at giving Him praise in all things and at all times – no matter the circumstances. Cling to David’s words in Psalms 13:5, trusting in the unfailing love of our Creator – ultimately, leading to a heart full of joy founded on His saving grace. As the song exclaims, revelation and salvation pulls you from despair into the arms of freedom. Freedom in your walk, freedom in Christ to do, give, and be who he wants you to (peacefully) be. We must learn to recite the words of scripture, fortifying our hearts, minds, and souls. Knowing that the declarations made in those words are solid foundations for our lives.

By the end of the song, the singer has come to realize that through God’s Love and us being His creation we find our strength. Knowing that He is the composer, we are merely His songs. That’s fascinating. Much like David writes in Psalms 139:13-14, “For you created my inmost being; you knit me together in my mother’s womb. I praise you because I am fearfully and wonderfully made; your works are wonderful, I know that full well.” We are created in the image of God, His character has been interwoven into us all. Worthlessness and self-loathing come straight from the enemy’s playbook – lying in wait to feed you lies and deceit about who you are. Truth is, the Holy Spirit is ready and willing to work within you. Knowing this, we should have as much respect for ourselves as our Creator has for us.

In conclusion, stop and think about who you are and what you were created to be. It’s really quite simple to be who and what we are created to be. Each person’s mold is completely different, yet the same Creator placed within each of us His own ‘witness marks’ – hints and indentations of Himself – placed there for us to pull love, strength and understanding from when it seems none of those things can be found. Be who He’s created you to be and pull strength from that – knowing that His Love is sufficient when nothing this world has to offer is.

“For we are God’s handiwork, created in Christ Jesus to do good works, which God prepared in advance for us to do. – Ephesians 2:10 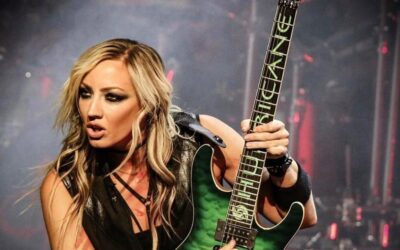 This week we step away from the “Song & Verse” narrative of Alice’s career and discography to look a little closer at life’s journey. This past week, after eight years with Alice Cooper, Nita Strauss (Hurricane Nita) announced that she is leaving the band.

END_OF_DOCUMENT_TOKEN_TO_BE_REPLACED

This week we look at the song ‘Novocaine’ from the album, ‘The Eyes of Alice Cooper‘. The song is the most natural one on the album according to Alice and has a definite ’70s vibe in both ambiance and production…

END_OF_DOCUMENT_TOKEN_TO_BE_REPLACED

Detroit Stories, released in 2021, is a hard-hitting Detroit-based LP. This week’s focus is “Go Man Go,” a fast-paced track recounting life on the run. It’s a fun one…