“Hell Is Living Without You” Lyrics:

I can’t take another night
Burning inside this…

Try to walk away when I see the time I’ve wasted
Starving at a feast and all this wine I’ve never tasted
On my lips, your memory has been stained
Is it all in vain
Tell me who’s to blame

I can’t take another night
Burning inside this

This week we re-visit Trash, an album that firmly placed Alice back into Top 20 status in both the US and UK. The LP was released in 1989, and the song “Poison” was the ultimate catalyst for the album’s success. The LP also featured collaborative works with Jon Bon Jovi and Steven Tyler.

Desmond Child produced the LP, and there were four singles released from the album – “Poison,” “Bed of Nails,” “House of Fire,” and “Only My Heart Talkin’.”

Videos for each single were released, and along with the likes of Guns’ n’ Roses, Mötley Crüe, Poison, Def Leppard, etc., Alice found himself catapulted into the ‘80s/’90s genre of “Hair Metal.” It was an audience and scene Alice admittedly wanted to attract.

“They weren’t just bands. They were good, and they did a show. They weren’t kidding around; they did lighting and sound. Poison was a good band, and Warrant and Ratt were good bands. I think we forgot that those bands live were really good. It was a new era.” – Alice Cooper

“Hell Is Living Without You,” the second to last song on the Trash LP, tells the story of someone that can’t bear the thought of living without the one they love. It’s a tale of desperation, sorrow, and remorse. And while the song gives no reference points or descriptors as to what has transpired, it’s obvious the loss is devastating.

Has this ever happened to you?

Have you been through a rough breakup or divorce?

Have you lost a loved one?

There are hundreds of scenarios in which this narrative makes sense. It may not even be life without a person; it might be wealth, alcohol, drugs, status, etc., but for this post, we will be focusing on living life as it was designed to be lived.

Hell is often used to describe a state of torment or misery. It can also reference a state of extreme disorder, confusion, or chaos. Even still, from the perspective of God’s Word, we find the word hell depicting eternal punishment, shut off from the presence of the Lord, a blazing furnace, the lake of fire, etc.

Looking at the song from a Biblical viewpoint, we find the torment and pain of a life lived by someone that has never fully known or embraced their Creator – the Hell we inflict upon ourselves when we choose to live life without Him.

In a nutshell, Hell is life apart from God – both here on earth and in eternal life.

We spend a reasonable amount of time “looking for love.” Humanity just wants to be loved – embraced, understood, cared for and cherished in some form or fashion. At our very core, we crave relationships with other people.

“And let us consider how we may spur one another on toward love and good deeds, 25 not giving up meeting together, as some are in the habit of doing, but encouraging one another—and all the more as you see the Day approaching.” – Hebrews 10:24-25

God’s Word often speaks about fellowship and the advantages of living a life together. In the above-listed verses, we find a call for unity, encouragement, and wisdom. We are stronger and more focused when we walk together with others – we were designed that way.

“22 Let us draw near to God with a sincere heart and with the full assurance that faith brings, having our hearts sprinkled to cleanse us from a guilty conscience and having our bodies washed with pure water. 23 Let us hold unswervingly to the hope we profess, for he who promised is faithful.” – Hebrews 10:22-23

In verses 22-23, we find the critical element of fellowship and unity – the foundation for our interactions and relationships.

Through sincerity and yearning to better know our Creator, we find the significance of walking together with the rest of His creation. In God’s Word, we see multiple verses calling for unity and the importance of community (Proverbs 18:1, 1 Corinthians 12:12-14, Acts 8:30-31).

We, as His creation, are a body held together by Him, our Creator – our Heavenly Father. From the time God noticed Adam should not be alone (Genesis 2:18), we find His design, providing us an alternative to isolation.

“Dear friends, let us love one another, for love comes from God. Everyone who loves has been born of God and knows God. 8 Whoever does not love does not know God because God is love. 9 This is how God showed his love among us: He sent his one and only Son into the world that we might live through him. 10 This is love: not that we loved God, but that he loved us and sent his Son as an atoning sacrifice for our sins. 11 Dear friends, since God so loved us, we also ought to love one another. 12 No one has ever seen God; but if we love one another, God lives in us and his love is made complete in us.” – 1 John 4:7-12

His Love is divine, known in Greek as Agape – a universal, unconditional form of Love that transcends and persists regardless of circumstance.

Wouldn’t absolute Hell mean living without Him and His adoration?

Living without His perspective, His guidance, and His wisdom?

Wouldn’t Hell involve living our lives without the presence of our Creator?

We’ve made a habit of first seeking things in this world and assuming that we can’t live without them. Instead, it’s the Love of God that we should pursue first.

His Love separates us from the things of this world – it is what truly defines purpose and fulfillment. Instead, we inflict Hell – torment, confusion, misery, and chaos – upon ourselves by willingly living and accepting a life without Him.

Read the lyrics to “Hell Is Living Without You’s” chorus, thinking about the Love our Father – the Love of a Creator who willingly sent His only Son to die for our sins and forever grant us access to Him through His Holy Spirit.

Knowing Him and feeling His healing power, His warm embrace, and His benevolent nature are overwhelming. All grace, mercy, and honor have been bestowed upon us because of Him, and the very thought of being apart from such magnificence is Hell.

John wraps up chapter 4, assuring us that without God, we are incapable of loving one another (or anything) – he placed in us the ability to love. So again, by design, we are instinctively drawn to connection and relationship because of Him.

Wrapping up this week’s post, our Heavenly Father is often depicted as some eternally angry all-knowing being ready and willing to strike us down when we slip up or get out of line.

If the above were true, humanity would have ceased to exist thousands of years ago. But, on the flip side, scripture reveals a caring Father willing to lift us up when the world wants nothing more than to drag us down.

“See what great Love the Father has lavished upon us, that we should be called children of God! And that is what we are! The reason the world does not know us is that it did not know Him.”  – 1 John 3:1

We’ve all heard the saying, “Hell on Earth.” Such a saying makes perfect sense in a world that does not know Him.

Many still see God as vengeful, angry, and ready to punish us. We urge you to search out His true nature, character, and intent if you feel this way. Through the writings of John, a disciple that walked faithfully with Christ (both in the flesh and in Spirit), you will find a loving Father that is defined as LOVE.

John paints a picture of pure, honest admiration – the Love of our Father made flesh and atoning for the fall of humanity. As we discover Him, it becomes evident that literal Hell is anything and any place void of Him and His presence.

May we all come to know Him and see Him for what He truly is – the purest form of Love – “Agape” Love.

In conclusion, life is one incredible ride – a surprising journey. When Trash was released, little was known about Alice’s transformation and faith, yet only a few years later, the vision and beginnings of what would become Alice Cooper’s Solid Rock Foundation started to take form.

The Rock, a teen center focused on presenting teens with the chance to explore their talents, was built from Coop’s vision. And he admits that Solid Rock is a faith-based endeavor, “The Lord told us to do it. So we just obeyed. That’s all.“

May we all come to see life and our walks with Christ this way. Not as some mandatory marching orders, but missions passed down with grace and mercy from a Father who wants nothing more than to show and share His Love without end. Amen.

Until then, Keep Walkin’ in Faith and Rockin’ with Alice!​

‘Flush The Fashion‘ is Alice’s twelfth studio album and the song ‘Pain’ is this week’s focus. Released in 1980, the LP falls under an umbrella of genres from Rock, Hard Rock, to New Wave. With a mixture of sarcasm and some story-based songs, the album still delivers a Cooper-based vibe and feel with songs such as: “Talk Talk”, “Clones (We’re All)”, “Model Citizen”, “Grim Facts”, and “Headlines”. All of which will likely…

END_OF_DOCUMENT_TOKEN_TO_BE_REPLACED

This week’s post focuses on another track from the ‘Brutal Planet (2000)’ LP. “Sanctuary” is the third track on the LP. And the song’s narrative paints the picture of the modern-day man using work, pills, possessions, and society’s objectives as his catalyst for “survival.”

END_OF_DOCUMENT_TOKEN_TO_BE_REPLACED 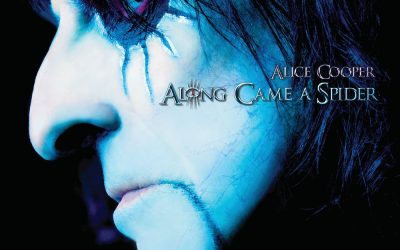 Released on July 29, 2008, “Along Came A Spider” is Alice Cooper’s 18th solo album. The LP, like many others, is a concept album, this time dealing with the life of a sociopath. “Salvation,” the last track on the LP, spins the album in a new direction…