Every Woman Has A Name (Ella Mae McCart Furnier Tribute, 2022)

“Every Woman Has A Name” Lyrics:

See it written on the grave
Every woman has a name

Mrs. Furnier was driven by her passion and love for Jesus Christ. Her faith was solid – she was a rock.

Ella Mae McCart Furnier passed into the arms of her Savior at midnight on Dec. 27th 2022. She was 97 years old.

Ella was born on September 16th 1925 to Sam and Ellen McCart in Glenmary, Tennessee. Raised on a farm she moved to Detroit, Michigan at age 16 to work with her sister in a factory during WWII. She was truly a “Rosie the Riveter”.

Ella’s passion was her love of Jesus and the gospel. This prompted her and her husband’s ministry to the Apache tribes living on the San Carlos reservation in Arizona from 1961 – 1987. As a pastor’s wife and a deaconess she served faithfully.

A new venture was taken when Ella opened a retail gallery in Old Town Scottsdale with her husband in 1977. She delighted in selling art, jewelry, and Native American treasures.

After her husband’s passing in 1987, Ella lived with her son Alice and daughter in law Sheryl for 30 years. Her influence was instrumental in helping to raise three grandchildren (Calico, Dashiell, and Sonora) and four great grandchildren (Falcon, Riot, Rexington, and Desiree).

As a mother, Ella was staunchly supportive of her daughter Nickie’s career in banking and her son Alice’s career in music. Fans knew and loved her worldwide.

Our family will miss her until we are reunited. 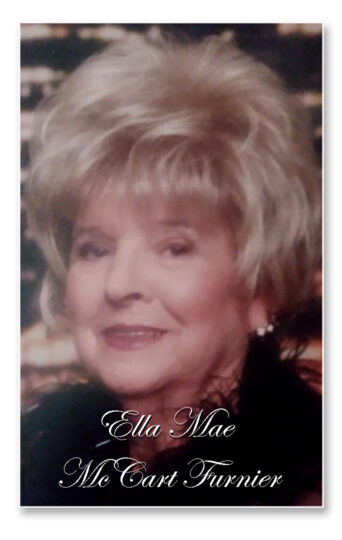 “For we know that if the tent that is our earthly home is destroyed, we have a building from God, a house not made with hands, eternal in the heavens.”

During some of Alice’s most trying times with health and addiction, she stood firm, putting her fears to rest by persistently fasting and praying for his recovery.

“My Husband and I just went and picked (Alice) up and helped him out as much as we could. His condition was very bad; he could hardly function…

My husband and I were fasting and praying; we just had to trust that the Lord was gonna be with (Alice). We had seen another time when he came through a miracle. This was a second miracle.” – Ella Mae McCart Furnier, referring to Alice’s recovery in the early ‘80s

It’s obvious. Mrs. Furnier was a warrior for Christ. She believed in His greatness and knew Him as Lord. May she rest in His loving arms forever, and may the Coopers rest knowing she has returned home.

This week, in memory of Mrs. Furnier, we take another look at “Every Woman Has A Name,” perhaps the greatest ballad ever written by Alice Cooper.

The song is found on the 2001 LP Dragontown and may seem out of place to some. However, if you look at it from multiple ways, it does make sense in the Dragontown concept.

“Every Woman Has A Name” is a heartwarming song and narrative that visualizes the struggle and plight of womanhood while also stirring the mind and soul – allowing the listener to experience gratitude and thankfulness for the women present in their lives.

Many parts of the world, religions, industries, etc., see women as inferior to men. At certain times throughout history, women were seen as property. In some cases, they were even required to marry men who raped them.

In addition, they were often considered spoils of war and subjected to unjust laws, yet God’s Word shows us that God views them as vessels of love, teachers, leaders, prophets, and disciples.

Looking at God’s Word, we see women as vital to His works and plan. We see the mystery of His will unfold, as all things in Heaven and here on earth are unified under Christ (Ephesians 1:9-10).

Before the coming of this faith, we were held in custody under the law, locked up until the faith that was to come would be revealed. 24 So the law was our guardian until Christ came that we might be justified by faith. 25 Now that this faith has come, we are no longer under a guardian.

26 So in Christ Jesus you are all children of God through faith, 27 for all of you who were baptized into Christ have clothed yourselves with Christ. 28 There is neither Jew nor Gentile, neither slave nor free, nor is there male and female, for you are all one in Christ Jesus. 29 If you belong to Christ, then you are Abraham’s seed and heirs according to the promise. – Galatians 3:23-29

Isn’t it remarkable how loving our Heavenly Father is? As the world spiraled out of control and demanded humanity to follow its course, our Heavenly Father sent Jesus Christ, His only begotten Son. The playing field was leveled through Christ; ALL are made one through Him.

Wrapping up this week’s post, we are asked to be examples of Christ’s Love (John 13:35) – His ambassadors appealing to others (2 Corinthians 5:20).

It’s evident throughout God’s word that women are not meant to be oppressed or silenced.  On the contrary, He expects them to spread His Gospel to all people just as frequently and as loud as He does men.

His love freely flows and surpasses all barriers which divide us as humanity. So, may we continue to search for Him and ask for His discernment and guidance as we push forward through this life – walking with His Spirit and representing the fruit we’ve been given (Galatians 5:22-23).

In conclusion, it’s often noted that Alice and Sheryl were products of their Christian upbringing. Both of them being Preachers’ kids (PKs), they knew the power of God before their experiences in Rock ‘n’ Roll.

Mrs. Furnier was a huge factor in that equation. May her life and story be a shining example of what it means to be a “Woman Who Fears The Lord” – someone that strived to know, love, and walk in Christ’s footsteps. Amen.

The Woman Who Fears the Lord

10 An excellent wife who can find?
She is far more precious than jewels.
11  The heart of her husband trusts in her,
and he will have no lack of gain.
12  She does him good, and not harm,
all the days of her life.
13  She seeks wool and flax,
and works with willing hands.
14  She is like the ships of the merchant;
she brings her food from afar.
15  She rises while it is yet night
and provides food for her household
and portions for her maidens.
16  She considers a field and buys it;
with the fruit of her hands, she plants a vineyard.
17  She dresses herself with strength
and makes her arms strong.
18  She perceives that her merchandise is profitable.
Her lamp does not go out at night.
19  She puts her hands to the distaff,
and her hands hold the spindle.
20  She opens her hand to the poor
and reaches out her hands to the needy.
21  She is not afraid of snow for her household,
for all her household are clothed in scarlet.
22  She makes bed coverings for herself;
her clothing is fine linen and purple.
23  Her husband is known in the gates
when he sits among the elders of the land.
24  She makes linen garments and sells them;
she delivers sashes to the merchant.
25 Strength and dignity are her clothing,
and she laughs at the time to come.
26  She opens her mouth with wisdom,
and the teaching of kindness is on her tongue.
27  She looks well to the ways of her household
and does not eat the bread of idleness.
28  Her children rise up and call her blessed;
her husband also, and he praises her:
29  “Many women have done excellently,
but you surpass them all.”
30 Charm is deceitful, and beauty is vain,
but a woman who fears the Lord is to be praised.
31  Give her of the fruit of her hands,
and let her works praise her in the gates.